Remembrance Day - a day to honour all who have served their country
I saw this article on another website and thought it was a nice tribute to the 4 legged soldiers. 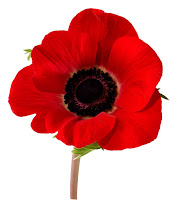 Remembrance Day, November 11th.
At 11:11am, I will spend 2 minutes of silent reflection, appreciating the freedom that I have today, understanding that I owe everything to those who fought and died for us in war.

What many of us don’t realize are the number of dogs who fought along side our soldiers in virtually every war since the existance of the domesticated dog.
Here are some historical examples of dogs used in war, according to the Wiki:

In the Vietnam war, K9 units are estimated to have saved over 10,000 human lives

So today, when you take a few minutes out of your busy day to remember the sacrifices our soldiers made for us, don’t forget about their 4 legged sidekicks.
Lest We Forget.
Posted by Royal City Animal Hospital at 11:11:00 am

Pet Care Sites you can trust